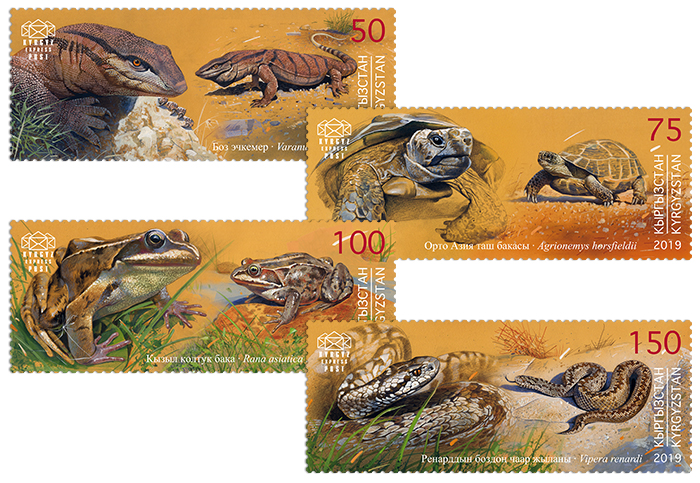 On September 6, 2019, the State Committee of Information Technology and Communications of the Kyrgyz Republic puts into circulation a series of Kyrgyz Express Post postage stamps: “Kyrgyz Republic Red Data Book (II). Reptiles and Amphibians”, which is continues the series of issues dedicated to the conservation of Kyrgyz wildlife.

This year on KEP stamps are illustrated the representatives of the wonderful world of amphibians and reptiles of Kyrgyzstan, namely: the Central Asiatic frog, the Russian tortoise, the Desert monitor and the Renard's meadow viper. Each of these species of fauna is included in the Red Data Book of the Kyrgyz Republic.

Desert monitor (Varanus griseus) is a large reptile of genus Varanus. This species is very rare in Kyrgyzstan. Its representatives can be found mainly in deserts and semi-deserts, as well as in the foothills of the ridges. The Desert monitor feeds on rodents, lizards, birds, snakes and insects. Also, this reptile has toxic saliva, which helps it to immobilize large prey. The Desert monitor has a very small population size and needs effective protection measures, such as the establishment of a special reservation in the Ferghana Valley.

Russian tortoise (Agrionemys horsfieldii) is a tortoise from the Testudinidae (land turtles) family. The average body length of these small reptiles is 15-20 cm. They live in Central Asia, preferring desert areas with thickets of wormwood, tamarisk, saxaul, and also foothills up to 1300 m above sea level. The number of this species’ representatives is constantly decreasing (in Kyrgyzstan it is in danger of total extinction), so the the Russian tortoise is listed not only in the Red Data Book of the Kyrgyz Republic, but also in the IUCN Red List of Threatened Species. It is interesting to note that the Russian tortoise has contributed towards human exploration of space. In 1968, two examples of this species were aboard the Soviet spacecraft "Zond-5", orbited the Moon and safely returned to Earth. They were the first living creatures to reach the Moon.

Central Asiatic frog (Rana asiatica Bedriaga) is a member of the Anura order (tailless amphibians). These frogs are small in size, their body length can be up to 80 mm. The Central Asiatic frog is mainly found in the north-east of Kyrgyzstan, as well as in certain areas of Kazakhstan and China. They feed mainly on insects, earthworms and molluscs. Unfortunately, the range of the Central Asiatic frog is decreasing due to climate change and the intense exposure of the anthropogenic factor. Therefore, this species of fauna needs urgent protection and preservation.

Renard's meadow viper (Vipera renardi) is a species of venomous snake from the viper family. Although this snake is poisonous, it does not pose a serious danger to humans. However, its venom is widely used for medical purposes in the treatment of dangerous diseases. In Kyrgyzstan, the Renard's meadow viper lives in the foothills of the Kyrgyz Ridge, in the Talas and Chui valleys. Unfortunately, the number of this species’ representatives is constantly decreasing, which adversely affects the overall ecological balance. Aside from the important role of the venom in medicine, the Renard's meadow vipers also makes significant contributions to the ecological balance by consuming rodents and locusts in large quantities.

Kyrgyz Express Post hopes that the new issue of postage stamps, "Kyrgyz Republic Red Data Book (II). Reptiles and Amphibians", will encourage the protection and conservation of these unique species of amphibians and reptiles, found in our country.

The original design of the stamps was carried out by the artist, Vladimir Melnic, with whom our philatelic bureau has been cooperating for many years. We hope that the new work of this wonderful artist will be, as always, highly appreciated by both specialists and all the lovers of the postal miniatures art form.

Once again, KEP expresses its gratitude to the Kyrgyz Wildlife Conservation Society (KWCS), and gives special thanks to Mr. Sergey Kulagin for his helpful assistance and advice in preparing this stamp issue.

The official issuance of new KEP series "Kyrgyz Republic Red Data Book" will be carried out not only in Bishkek, but also in the capital of the Czech Republic, Prague, where, on September 6, will be held one of the largest philatelic exhibitions in Europe - "Sberatel".

In addition to the above-mentioned stamps, KEP also issues four postcards dedicated to these wonderful fauna species. These cards were used to make maximum cards by the application of the issued stamps and the pictorial postmark.

You can check the newsletter for the new KEP issue here
Stamps, maximum cards and FDC can be purchased here