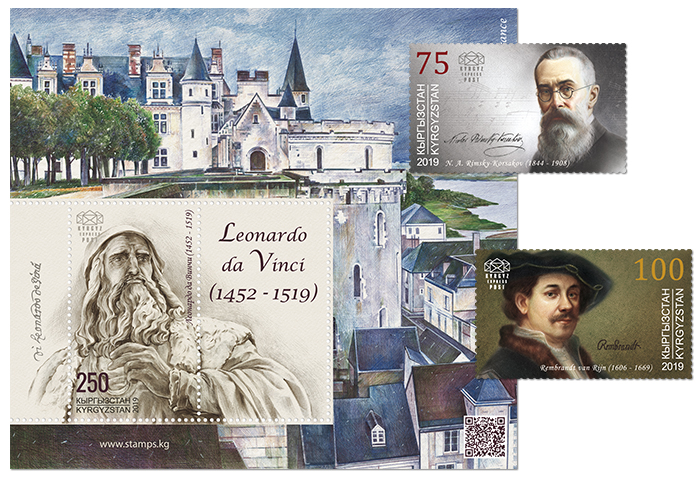 The Anniversaries of Great Personalities
11 November 2019

On November 18, 2019 the State Committee of Information Technology and Communications of the Kyrgyz Republic puts into circulation a series of Kyrgyz Express Post postage stamps and a souvenir sheet: “The Anniversaries of Great Personalities”.

Nikolai Andreyevich Rimsky-Korsakov (18.03.1844 - 21.06.1908) was a Russian composer, conductor, teacher, music critic and member of the musical creative community "The Five" (a.k.a “The Mighty Handful”). He was the composer of 15 operas, 3 symphonies and many chamber, instrumental, vocal and spiritual works.

Rimsky-Korsakov was born into the family of a naval officer. He graduated from the Naval Cadet Corps and in his young years, served in the Navy. However, his true calling was music, to which he devoted his entire life. The music of Rimsky-Korsakov is distinguished by its national character, inspired by Russian fairy-tale folklore. Everyone knows his operas: "The Snow Maiden", "Sadko", "The Tale of Tsar Saltan" and "The Golden Cockerel." The theme of the interlude for the opera "The Tale of Tsar Saltan", which is called "The Flight of the Bumblebee", became particularly popular.

The composer took an active public position, supporting the progressive socio-political forces of Russia. During the revolutionary events of 1905-1907, he spoke in support of the striking students, an act for which he was dismissed from the St. Petersburg Conservatory.

Being a great teacher, Nikolai Rimsky-Korsakov created a great composer's school. Among his students were about 200 musicians who comprised the pride of musical art of the 20th century.

Rembrandt Harmenszoon van Rijn (15.07.1606 - 04.10.1669) was a Dutch painter, draftsman and engraver. He is one of the most prominent representatives of the golden age of Dutch painting. His paintings "Danaë", "The Night Watch", "The Return of the Prodigal Son" as well as numerous portraits and self-portraits, have become an important part of the world's cultural heritage.

Rembrandt's works, extremely diverse in genre, reveal the whole range of human experiences with great emotional expressiveness. The artist used a minimum of colors, but at the same time he managed to make his paintings "live", thanks to the play of light and shadows. Rembrandt was a great master of chiaroscuro, using it as a means of increasing spirituality and emotional saturation in his works.

During his lifetime, Rembrandt created about 350 paintings and 100 drawings, which were not fully appreciated by his contemporaries. It took humanity two centuries to appreciate how wonderful are the works of this truly great artist.

Rembrandt's work had the deepest impact on the development of the world's realistic art and the artist has been recognized as one of the most prominent painters of all time.

Leonardo di ser Piero da Vinci (15.04.1452 - 02.05.1519) was an Italian artist, architect, sculptor, scientist, inventor, engineer, writer and musician of the High Renaissance. In the fullest sense, he was comprehensively developed. He was a genial and universal man, who was not accidentally called the titan of the Renaissance.

To our contemporaries, Leonardo is known primarily as an artist, although da Vinci considered himself primarily an engineer and a scientist. Nevertheless, his contribution to world artistic culture is extremely important. Leonardo realized and embodied a new painting technique, as a result of which, realism in painting moved to a completely different stage of development. Leonardo's works, such as "The Mona Lisa" ("La Gioconda"), "The Last Supper", "Lady with an Ermine", "Madonna Litta", "Madonna Benois" and many others, continue to delight art connoisseurs on all continents.

Leonardo da Vinci was one of the founders of modern science which is based on experimental research. He has made significant contributions to the development of astronomy, mechanics, hydraulics, anatomy, botany, mineralogy and other fields of science. His achievements in engineering are striking. Many of Leonardo's inventions were brought to life only some centuries after his death: flying machines, self-propelled wagons, spotlights, parachutes, a two-lens telescope, diving equipment and many others. His famous drawing "The Vitruvian Man" still serves as the ideal of proportions of the human body and the entire universe.

The highest skill, breadth of views and versatility of the talent of the great Leonardo are timeless and will always arouse the keen interest of the general public.

KEP hopes that the new issue of the stamp series "The Anniversaries of Great Personalities" will contribute to the celebration of the anniversary dates of these brilliant representatives of universal culture.

You can check the newsletter for the new KEP issue here
Stamps, souvenir sheet and FDCs can be purchased here