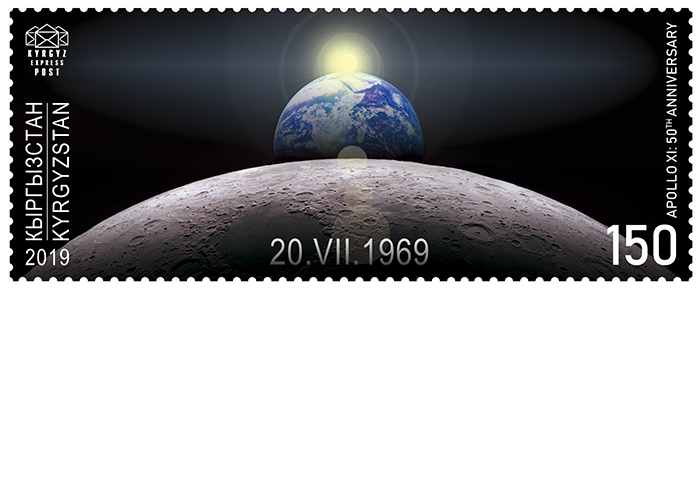 50 years ago, the outstanding mission of the U.S. with manned spacecraft, Apollo XI, was successfully completed. On July 20, 1969, crew commander Neil Armstrong and pilot Buzz Aldrin landed the lunar module of the spacecraft and for the first time in human history a man walked on the Moon (the third crew member, the pilot of the command module Michael Collins, flew the module in lunar orbit). The new KEP postage stamp is dedicated to the 50th anniversary of this truly epochal event.

The American astronauts spent more than 20 hours on the Moon, and the "walks" of Armstrong and Aldrin on the surface lasted two and a half hours. They placed a set of scientific instruments on the Moon and collected samples of lunar soil, which were safely returned to Earth.

Before he put his foot on the Moon's surface, Neil Armstrong uttered the phrase which later became famous: "That's one small step for man, one giant leap for mankind."

After the Apollo XI mission, U.S. astronauts made six more successful landings on the Moon, providing a huge breakthrough in space exploration and development. The Apollo program was completed in 1975 and it has proven to be one of the most remarkable achievements in the history of mankind. There is no doubt that the experience gained during this program will be an excellent basis for the next stage of the development of the Moon and other objects of the solar system in the 21st century. Perhaps in the next 10 years new expeditions of humans will visit the Moon, preparing a bridgehead for future flights to Mars.

The feat of the Apollo XI astronauts will forever be one of the most remarkable events in world history. By putting this stamp into circulation, KEP is honored to contribute to the celebration of the 50th anniversary of the first man landing on the Moon.

You can check the newsletter for the new KEP issue here
Stamps, maximum card and FDC can be purchased here