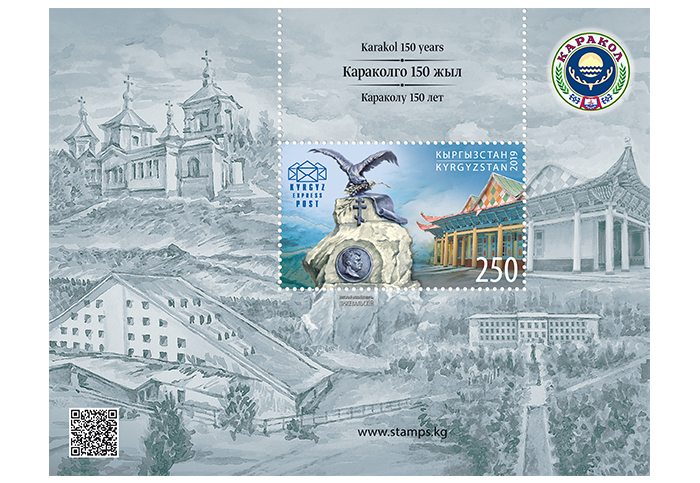 Karakol is the administrative center of The Issyk-Kul region. It is the fourth largest city in Kyrgyzstan. Karakol is located near the eastern tip of Lake Issyk-Kul, about 150 km from the Kyrgyz-Chinese border and 380 km from the capital of Kyrgyzstan - Bishkek. The new souvenir sheet from KEP is dedicated to the anniversary of this city.

Karakol was founded on July 1st, 1869 as a military administrative center on a caravan road from Chui Valley to Kashgaria. The founder was the Russian military figure and scholar, Baron Alexander von Kaulbars. Initially, the settlement was called Karakol, but soon the name was changed by the decision of the authorities. From 1889 to 1922 and from 1939 to 1992, the city was named Przhevalsk, in honor of the great Russian traveler and scientist Nikolay Przhevalsky. From 1922 to 1939, the city had the Kyrgyz name Karakol (which means "Black Hand"). When Kyrgyzstan gained its independence, in 1992, Przhevalsk was given back its original name, Karakol.

At present, the city is not only an administrative, but also a major industrial center of the Issyk-Kul region. Here, in 2014, the Kyrgyz government established the Free Economic Zone (FEZ) Karakol. The city also has a great tourist potential. Apart from modern ski resorts Karakol is located near Lake Issyk-Kul, one of the greatest tourist sights of Kyrgyzstan. The main Karakol attractions are: the Local History Museum, the Dungan Mosque, the Holy Trinity Orthodox Church, the Memorial Complex-Museum of Nikolay Przhevalsky (here one can see his tomb), the Karakol Ski Base, the Zoo (the only one in the country), the Jeti-Oguz Gorge and the Karakol Gorge. These main attractions of the city are represented on our souvenir sheet.

Karakol is one of the most beautiful cities of Kyrgyzstan, a tourist paradise for both the local population and foreigners coming here to get some rest.

KEP hopes that this new issue will be a good anniversary present for Karakol and it will help to increase the number of foreign tourists in this wonderful city and its surroundings.