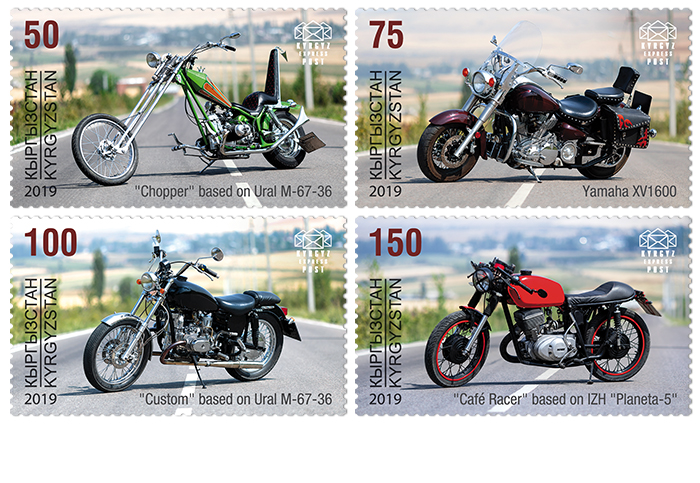 On October 16, 2019 the State Committee of Information Technology and Communications of the Kyrgyz Republic puts into circulation a series of Kyrgyz Express Post postage stamps: “Motorcycling in Kyrgyzstan”.

The word "biker" doesn’t mean a person who just loves powerful bikes, but a person for whom the motorcycle is an important part of the lifestyle. The Biker Movement is a unique subculture which started in the United States in the 1950s and has rapidly spread around the world, including Kyrgyzstan. The new series of KEP stamp is dedicated to bikers and their beasts.

There are more than 500 bikers in Kyrgyzstan. The largest biker organization is the Motorcyclist’s Community of Kyrgyzstan. Among other things, this public association is engaged in important charitable activities, such as helping people in need of protection and assistance.

Kyrgyz Express Post expresses its appreciation to Custom Cult's motorcycle workshop for its advice in preparing this stamp issue. By the way, this workshop has an interesting YouTube channel, which we recommend to check out.

We hope that the new KEP series will be highly appreciated not only by the bikers, but also by all lovers of postal miniatures.

You can check the newsletter for the new KEP issue here
Stamps, maximum cards and FDC can be purchased here