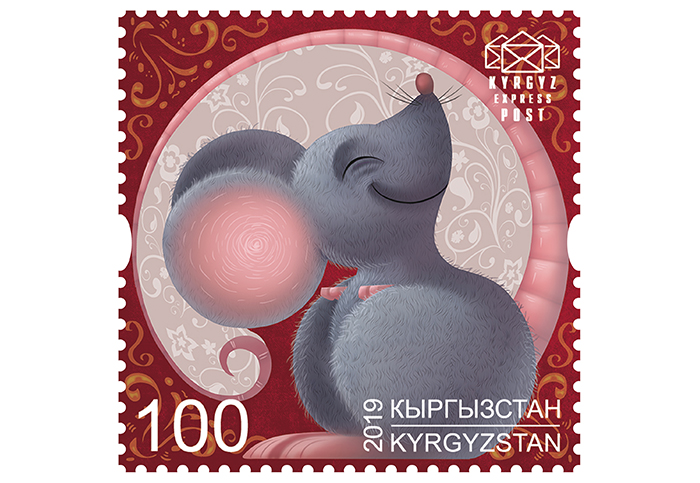 On December 2, 2019 the State Committee of Information Technology and Communications of the Kyrgyz Republic puts into circulation a Kyrgyz Express Post postage stamp: “Year of the Rat” - the last issue of KEP from this year.

The coming year, according to the Chinese calendar, will be the Year of the White Metal Rat and it will begin on January 25, 2020.

The rat is the first zodiac animal of the Chinese horoscope, which begins a new 12-year cycle, that’s why the Year of the Rat is considered important for all signs of both Eastern and Western zodiacs.

As it is known, in the Western world the rat is rather considered a distasteful animal, a pest and a carrier of various diseases. By contrast, in the Eastern world and particularly in China, the rat is a sacred animal that symbolizes courage, cunning and the ability to achieve goals by any means.

Rats are smart, resourceful and versatile. They are strong and independent animals. Therefore, astrologers consider that the Year of the White Metal Rat will be a very successful year for ambitious and purposeful people. Of course, this year promises to be especially successful for those who were born in the Year of the Rat. It is known that during the years of this zodiac sign many world-famous personalities were born, including: Wolfgang Amadeus Mozart, Leo Tolstoy, Pyotr Tchaikovsky, William Shakespeare, Louis Armstrong, Bulat Okudzhava, Winston Churchill, Jules Verne and many others.

KEP has the honor and pleasure to sincerely congratulate all our friends, partners and customers with the coming year 2020 and wishes you good health, happiness, good luck and success in all future endeavors.

You can check the newsletter for the new KEP issue here
Stamp, maximum card and FDC can be purchased here