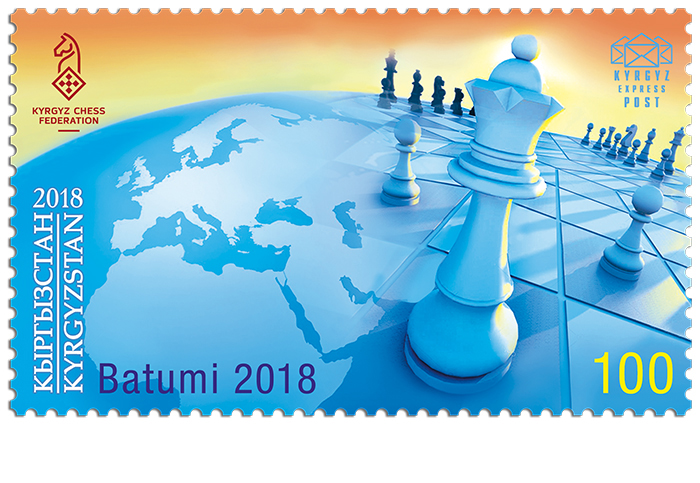 A new KEP issue is dedicated to the 43rd Chess Olympiad, which will take place in the Georgian city of Batumi, from September 23 to October 6, 2018.

Chess is a very popular sport. Millions of people on the planet play this ancient, intellectual game. The World Chess Federation (FIDE), since 1927, organizes official Chess Olympiads. Since 1950, they are held once every two years. Georgia has always been famous for its chess players, so it is not surprising that this country received the honor of hosting the 43rd Chess Olympiad.

As in 2016, the team from Kyrgyzstan participates in the Chess Olympiad. We hope that the chess players of our country will achieve good results in Batumi.

The KEP stamp, with a face value of 100 KGS, represents a chessboard and pieces against a background of a world map, as well as the logo of the Kyrgyz Chess Federation. Sheetlets, in which the stamp is issued, contain four stamps and two labels in the center. The labels depict two different chess combinations. Chess fans might be able to trace the possible variants of the development of moves in these combinations.