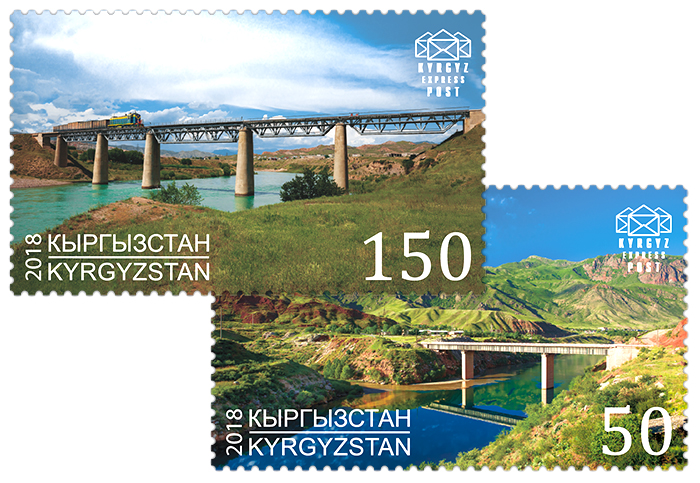 Bridges are not only important engineering facilities that help overcome obstacles to road traffic but, since ancient times, bridges have been considered a symbol of progress, stability, cohesion and cooperation.

For Kyrgyzstan, which has a highly complex mountainous terrain, bridges have always played and continue to play a primary role in the field of communications. Construction and operation of bridges in our country has always been given special attention. At present, in Bishkek alone, there are 42 bridges and overpasses.

A new issue of KEP postage stamps is dedicated to the bridges of Kyrgyzstan. The series includes two stamps representing, respectively, one automobile and one railway bridge.

On the postage stamp with the face value of 50 soms, the automobile bridge near the town of Kara-Kul (Jalal-Abad region), is depicted. This bridge is part of the strategically important Bishkek - Osh highway, linking the north and south-west of Kyrgyzstan.

The stamp of 150 soms represents a railway bridge across the Naryn River near the village of Kuduk (Jalal-Abad region). This is the largest railway bridge in Kyrgyzstan with a length of 210 meters.

When preparing the issue of stamps and cards of this series, photos of Ivan Turkovskii were used.

You can check the newsletter for the new KEP issue here
Stamps, FDC and maximum cards can be purchased here