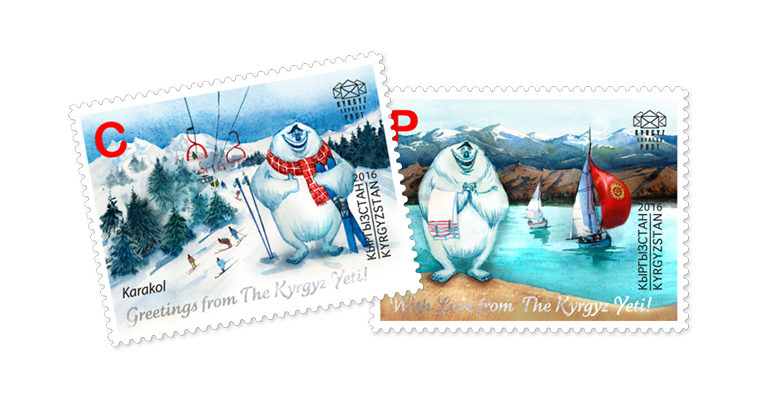 On May 19th The Ministry of Transport and Communications of the Kyrgyz Republic puts into circulation a series of 2016 KEP postage stamps. This is the first issue of definitive stamps with a relatively big print run, intended to attract the attention of as many people from the Kyrgyz Republic, and from other countries, as possible, to compliment the great touristic potential of our country. Another peculiarity of the new stamps is the fact that they are printed using self-adhesive paper and at the same time, a part of the print run is issued in special booklets.

KEP responded with understanding to the initiative of the Ministry of Culture, Information and Tourism of the Kyrgyz Republic, which implied issuing postage stamps that would inform the international community about Kyrgyzstan as a country with unique touristic, cultural and historical potential. The issue initiates a “Legends of Kyrgyzstan” series and is dedicated to the Yeti - a peculiar character, well known around the world.

There is hardly a person in the world who has never heard the legends of this mountain monster. As for Kyrgyzstan, for a long time people from this area have been telling stories about the so-called “Kyik-Adam” and “Zhapaii-Adam”. And no wonder, because these legendary creatures are believed to have lived, and still live right in the mountains of our geographical area (Tian Shan, Pamir, Himalayas). This may be the reason why, since ancient times, Kyrgyz folklore has had so many legends about Yeti. Moreover, there are many accounts from various people who claim to have seen, with their own eyes, the Yeti himself or his huge footprints.

Putting aside the discussion about whether or not this phenomenon is actually real, we would really like to draw attention to the possibility of using this legend in order to promote the touristic image of Kyrgyzstan, attract as many international visitors, as possible, create, if you will, a distinctive brand of our country. No wonder tourism industry of many countries and regions in Himalayas (Nepal, Bhutan, northern states of India, Tibet) successfully use legends of Yeti to attract millions of tourists from all over the world. These examples are surely worth taking into account within our country.

By issuing these stamps, KEP, in an amusing manner, invites international tourists to visit Kyrgyzstan and get to know the ancient culture of the hospitable people, enjoy the splendid landscapes, relax by the beautiful mountain lakeside of Issyk-Kul, spend some time skiing at one of the best ski resorts - Karakol. And, when you are high in the mountains, maybe (why not!), you will be able to see the legendary Yeti!

You can check the newsletter for the new KEP issue here
You can purchase the stamps, booklet and FDC here