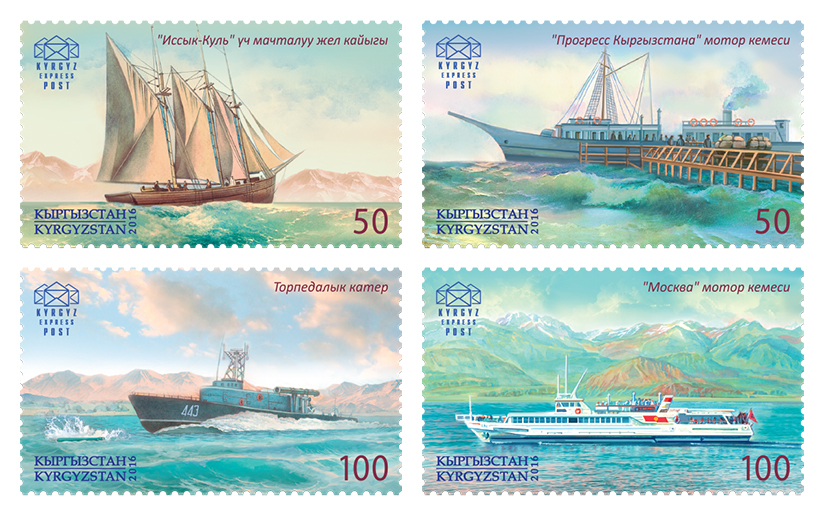 The latest in this year issue of Kyrgyz Express Post postage stamps is dedicated to navigation on Lake Issyk-Kul.

The natural pearl of Kyrgyzstan, Lake Issyk-Kul, is one of the 25 largest lakes in the world, by area, and occupies 6th place in the list of the deepest lakes on the planet.

The first large ships on Issyk-Kul were sailing longboats and schooners. In the twentieth century the relay was accepted by more powerful and efficient motor ships. In 1925 it was created the Issyk-Kul State Shipping Company, which played a major role in the transport shipping in the region. Cargo and passenger ships carried out transportation between the cities of Rybachye (now Balykchy) and Przhevalsk (nowadays Karakol), as well as other wharfs. It was the highest mountain fleet in the USSR.

Issyk-Kul has played and continues to play a significant role in military and naval matters. The testing facilities of the Russian Navy are located on the Lake, where torpedo weapons are tested.

A series of four Kyrgyz Express Post postage stamps reflects some pages from the history of navigation on Lake Issyk-Kul. The first stamp shows the three-masted schooner "Issyk-Kul", which carried cargo and passengers in the early twentieth century. The second stamp shows the motor ship "Progress of Kyrgyzstan", launched in 1926. The third stamp depicts the luxury cruiser "Moscow" of the President of Kyrgyzstan. The series is completed by the fourth stamp, which depicts a torpedo boat, carrying out a weapons test on Lake Issyk-Kul.

We hope that all collectors and especially transportation and navy fans will highly appreciate our new stamp issue.