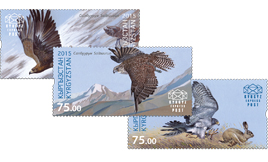 The third KEP stamp issue: “Salbuurun — Falconry in Kyrgyzstan”
13 May 2015

The Kyrgyz Republic Federation “Salbuurun” addressed Kyrgyz Express Post to issue a series of stamps dedicated to the Kyrgyz National hunting. KEP decided to seize the Federation’s offer and added the themed series to the 2015 KEP Stamp Issuing Plan. On May 14th the issue will be put into circulation at the KEP post office 729002.

Since the ancient times, hunting was one of the main occupations of the Kyrgyz men. Using the hunting birds and hound dogs (Taigan breed) would be the height of the hunting skills and Kyrgyz people have been proving to obtain these skills for a long time.

Using hunting birds such as falcons, hawks and eagles, as well as their training, became an essential part of Kyrgyz culture. Kyrgyz history implies falcon to be not only a hunting bird, but also a totem and an object of reverence. The sacred white gyrfalcon (Ak Shumkar) is the devoted companion of Manas, the character from the Kyrgyz Epic.

It is also worth mentioning that UNESCO included Falconry in its Lists of Intangible Cultural Heritage.

Besides the stamps, KEP also issued 3 postcards dedicated to the Falconry. The postcards were used to make maximum cards, using the issued stamps and the First Day of Issue special cancellation.

We hope that the new KEP issue will draw attention of not only Kyrgyz collectors, but also of the philatelic society representatives from all over the world. KEP is convinced that this issue will contribute to the widespread awareness of this part of the cultural heritage of Kyrgyz people, of the The Kyrgyz Republic Federation “Salbuurun” activities. It will also stimulate the youth to become a part of this national occupation and help promoting the preservation of such amazing Kyrgyz fauna representatives.

You can check the newsletter for the new KEP stamps issue here. You can purchase the stamps, FDC and maximum cards here.