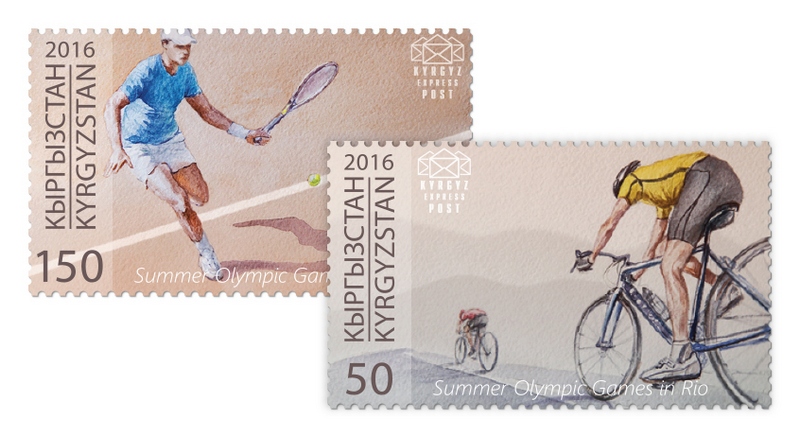 From August 5 till 21, the South American continent will host the XXXI Summer Olympics in Rio de Janeiro (Brazil). There will be representatives from more than 200 countries participating at the biggest sports event in four years, including 17 sportsmen from Kyrgyzstan. This Olympics will award the record number of 306 medal sets for its 28 sports disciplines.

Taking into account the worldwide importance of the sports event, KEP has decided to issue a series of stamps, dedicated to the Summer Olympic sports. By the order of the State Committee for Information Technology and Communications of the Kyrgyz Republic, the series will be put into circulation on August 5, 2016.

The series includes two stamps. The first one (50 KGS face value) depicts cycling. At the Summer Olympics in Rio, the cycling sportsmen will compete for 18 medal sets.

The second stamp (150 KGS) is dedicated to one of the most popular sport - tennis. The Olympic competition includes singles and doubles.

Both stamps are issued in miniature sheets of 4 stamps each. There is also a gutter, which horizontally divides two pairs of stamps, and represents stylized images of football game and athletics fragments. There are pictograms depicted on the sheet borders, symbolizing various sports, typical for the Summer Olympics.

We would like to wish a lot of luck, outstanding records and all types of medals to all participants of Olympics in Rio de Janeiro, especially to the sportsmen from our country.