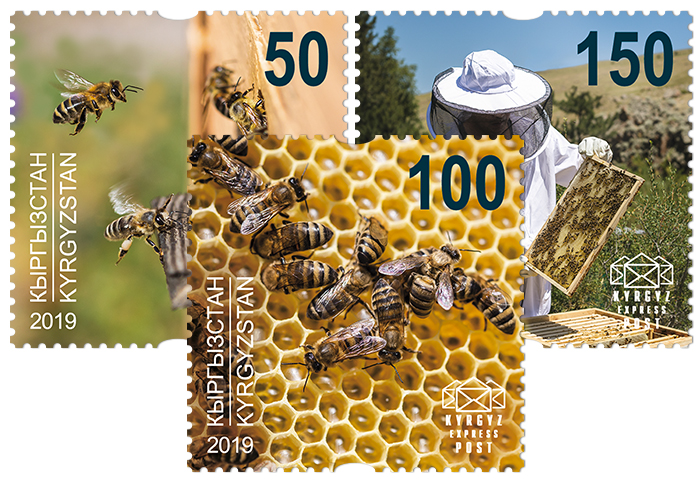 On October 28, 2019 the State Committee of Information Technology and Communications of the Kyrgyz Republic puts into circulation a series of Kyrgyz Express Post postage stamps: “Beekeeping in Kyrgyzstan”.

The new issue of KEP stamps is dedicated to beekeeping, a very important area of human activity. As is well known, bees give people honey, which is a unique food and a therapeutic product. However, the role these wonderful insects in agricultural production is no less important. Bees pollinate plants, which increases their yield by 30-50% and also improves the quality of seeds.

Due to the favorable climate and the wide spectrum of bee-friendly plants, Kyrgyzstan produces high-quality honey in large quantities. Our country has extensive, high-altitude pastures, covered with a large variety of honey plants. The meadows, the foothill pastures and the hayfields in the lower mountains are also rich in valuable honey-bearing plants. It's no wonder Kyrgyz honey is one of the best in the world. This is confirmed by numerous awards in many international competitions. For example, in 2013 at the XLIII International Apimondia Congress in Kiev, the At-Bashi white mountain honey (At-Bashi district is located in Naryn region in the north of the country) was awarded with gold medal. Other types of Kyrgyz honey have also received awards. Kyrgyz honey has also got the highest appreciation at 44th Apimondia International Apicultural Congress in Daejeon, South Korea.

Honeybees were first brought to Przewalski county by Russian settlers in the 1870s. In southern Kyrgyzstan, beekeeping was not practiced until the early 20th century. Kyrgyz beekeepers have made great strides in a relatively short period of time. In the early 1990s, there were 12,000 beekeepers in Kyrgyzstan and 446,000 families beehives, producing 12,000 tons of honey a year. Kyrgyzstan was one of the leading suppliers of honey and beekeeping products to the foreign market. Unfortunately, after the collapse of the Soviet Union, this industry faced great problems, and the production of honey has significantly decreased. According to different estimations, in Kyrgyzstan there are about 1,000 beekeepers and 90,000 families beehives, producing about 3,000 tons of honey a year. Kyrgyzstan also has a public association called "Kyrgyz Union of Beekeepers", which actively participates in various national and international fairs, exhibitions and promotions. This Union is a member of the prestigious International Organization of Beekeepers "Apimondia".

By this issue, KEP is happy to express its support for domestic beekeepers and hopes that beekeeping in Kyrgyzstan will bravely overcome the existing problems and will continue to flourish in a sustainable manner.

For the postal miniatures, KEP used photographs by Ivan Turkovskii and Vladislav Ushakov. The photographs were taken on apiaries in the gorges of Ala-Archa, Chichkan and near the Sary-Chelek Lake.