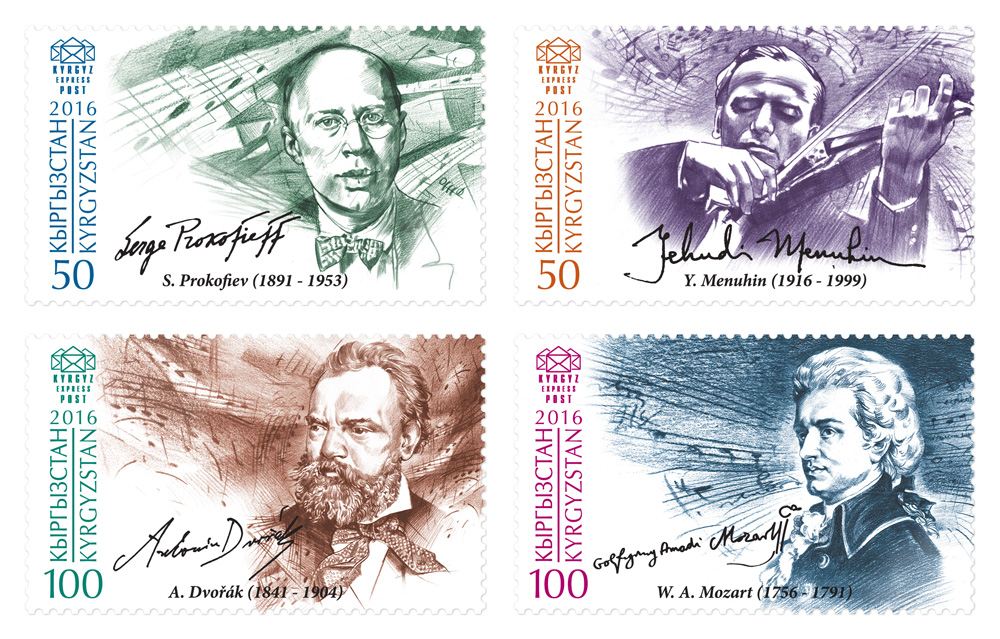 The Anniversaries of Great Musicians
06 September 2016

The KEP 2016 stamp issuing plan has been changed: instead of the “Modern Fantasy Literature” issue (4 stamps), the State Committee for Information Technology and Communications of the Kyrgyz Republic is issuing 4 stamps, dedicated to the Anniversaries of Great Musicians.

S. S. Prokofiev (1891-1953) was one of the most significant composers of the twentieth century. He became a part of music history as an innovator of the musical language. He was author of 11 operas, 7 ballets, 7 symphonies and many other pieces. Prokofiev also composed music for such movies as “Alexander Nevsky” and “Ivan the Terrible”. His ballet “Romeo and Juliet” is famous worldwide, as well as his opera “War and Peace”, based on the novel of L. Tolstoy.

Yehudi Menuhin (1916-1999) was an outstanding American-born violinist and conductor. He considered that music should contradict everything that makes people’s thoughts and feelings brutal. By his performances he would always realise this notion. Besides his outstanding musical abilities, Y. Menuhin was also known as a philatelist. He was the head of the International Philatelic Association “Philatelic Music Circle” and one of the judges at the international competition for the best music-themed postage stamp within the musical subject. Since 2001 the annual award for the best music-themed postage stamps has been named after Y. Menuhin.

Antonín Dvořák (1841-1904) was an outstanding composer, who, together with B. Smetana, created the Czech music school. He was famous internationally, and at home he was considered a classic musician even during his lifetime. There is hardly a person who would not enjoy the “Slavonic Dances” and many other musical pieces, written by A. Dvořák.

W. A. Mozart (1756-1791) was one of the greatest composers of all time. For almost 300 years his musical pieces have never become outmoded and have been regularly performed in concert halls around the world, including Kyrgyzstan. Many pieces, written by Mozart, are considered masterpieces of symphonic, concert, chamber, opera and chorus music.

We hope that the new KEP stamps, dedicated to the great musicians, printed according to the highest artistic and polygraphic standards, will attract attention of many collectors and all the devotees of the philatelic miniatures.

You can check the newsletter for the new KEP issue here
You can purchase the stamps, maximum cards and FDC here