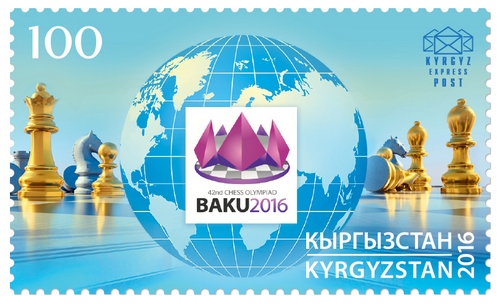 Chess is an ancient intellectual game, which is considered to be one of the most popular sports on the planet. While originated in the East, the game has eventually devoured all the continents and prompted the organisation of the World Olympiads. The next, 42nd Chess Olympiad will be held in the capital of Azerbaijan, Baku, from September 1 till 13, 2016. Together with the best chess players from around the world, the Kyrgyz team too will be showing their skills in Baku.

To mark this notable sport event, the State Committee for Information Technology and Communications of the Kyrgyz Republic has decided to issue a KEP postage stamp, dedicated to the Baku Chess Olympiad. The stamp depicts several chess pieces and the official logo of the 42nd Baku Chess Olympiad against the terrestrial globe.

The stamp, with the face value of 100 KGS, was issued in miniature sheets of 4 stamps. Two coupons horizontally divide two pairs of stamps. The coupons depict two chess combinations - “simultaneous attack” and “double attack”. We hope that the chess fans will be interested to assume the possible outcomes out of the two depicted combinations.

We would like to wish a lot of luck, success, beautiful and exciting chess games to all participants of the 42nd Chess Olympiad.