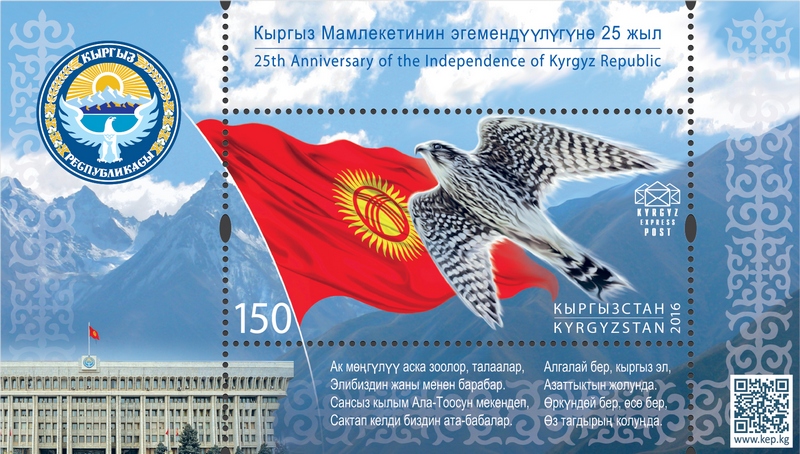 The 25th anniversary of the independence of Kyrgyzstan
23 August 2016

August 31, 2016 marks the 25th independence anniversary of the Kyrgyz Republic. The Declaration of sovereignty, adopted in 1990 and the declaration of Independence, adopted on August 31, 1991, started a new chapter of the centuries-old history of Kyrgyz people. The process of creating a valid sovereign state, with all the necessary attributes, was initiated. The first President of the sovereign Kyrgyzstan was elected in 1991 and on May 5, 1993, the first Constitution of the Kyrgyz Republic was adopted. According to the Constitution, the Parliament of the country was called Jogorku Kengesh of the Kyrgyz Republic. The other important attributes of the state system were also approved: the Flag (March 3, 1992), Coat of Arms (January 14, 1994), Anthem (December 18, 1992) and the national currency - som (KGS), which was put into circulation on May 3, 1993.

The process of approval of the independent Kyrgyz state was sometimes developing in complicated economical, social and political conditions. However, the people has proved its striving for the path of freedom, democracy and progress. Even the main idea of the famous national epic “Manas” was also the people’s striving for its independence. This purpose has been persevering over the centuries and leading the Kyrgyz people through all the troubles and misfortunes, retaining the spirit of the people, its faith for a better future.

In order to mark the quarter-century anniversary of the country, the State Committee for Information Technology and Communications of the Kyrgyz Republic puts into circulation a KEP souvenir sheet. The souvenir sheet consists of one 150 KGS stamp that depicts the national Flag and a gyrfalcon, which is also called “Ak-shumkar”. The sheet borders depict a mountain landscape, together with the Coat of Arms, the Parliament building Jogorku Kengesh and a phrase from the Kyrgyz Republic Anthem.