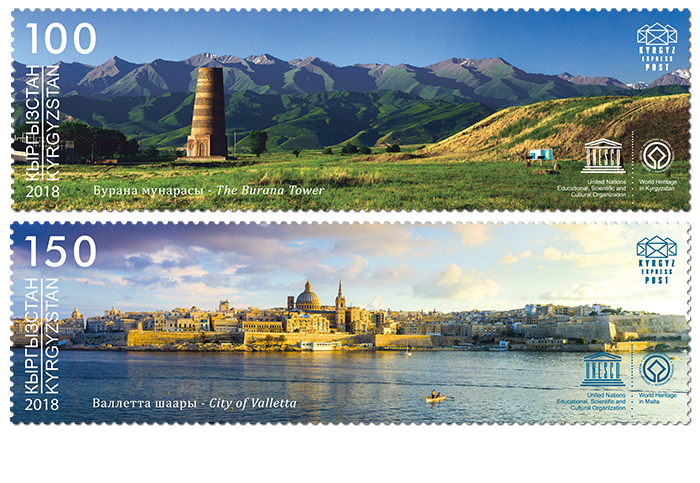 A new issue of KEP postage stamps is implemented in cooperation with the postal service of the island state of Malta. The joint issue between the two countries is dedicated to the 25th anniversary of the establishment of diplomatic relations between the Kyrgyz Republic and the Republic of Malta..

Despite the geographical distance, there are friendly relations, with mutual understanding and cooperation, between Kyrgyzstan and Malta. Our countries cooperate, fruitfully, within the framework of many international organizations. It is interesting to note that in 2015, Kyrgyzstan and Malta were simultaneously approved as founding members of the Asian Infrastructure Investment Bank (AIIB). This bank finances the development, in Asia, of roads, railways, airports and other important infrastructure facilities.

The subjects of the joint stamp issue are places included in the World Heritage List of UNESCO: the Burana Tower in Kyrgyzstan and the city of Valletta, the capital of Malta.

KEP expresses the hope that this joint issue between Kyrgyzstan and Malta will contribute to strengthening the friendship and cooperation between our countries and peoples.

For this series, KEP also issues one postcard (the Burana Tower), which will be used to realize a maximum card.

On the day of the putting into circulation of the stamp joint issue, KEP and the post office of Malta will participate in the international philatelic fair Veronafil in the city of Verona (Italy). In this connection, a special first day cancellation will be prepared.