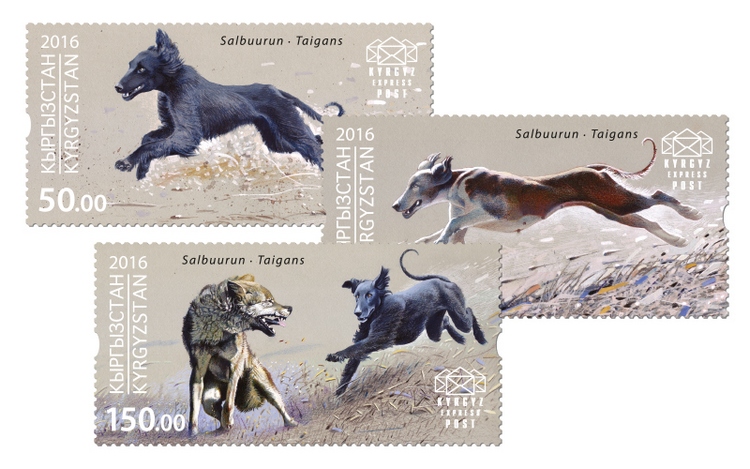 Through its stamps KEP continues to introduce the general public to the peculiarities of the national hunting of Kyrgyz people. Last year we issued stamps that depicted falconry. This year the series of stamps is dedicated to hunting, involving hound dogs - taigans.

Taigans represent a breed of universal hunting dogs, typical for mountainous areas, that are truly a national pride of Kyrgyz people. Since the ancient times, the taigan puppy was considered the best present a family could get, because it embodied a friend, a defender and a breadwinner. In the "Epic of Manas”, which is the traditional epic poem of the Kyrgyz people, this breed is repeatedly mentioned. For example, the episode that tells a story of how the legendary bogatyr is preparing for a long campaign and finds a devoted friend and companion - a hound dog named Kumayik, whose name has become a traditional one for white taigans, symbolising hunting skills and courage.

Taigans are a remarkable breed, because they have been developing in mountainous conditions and, therefore, are very well adapted to the high altitudes (hypoxemia). No wonder these beautiful animals are sometimes called “Kings of the Mountains”. Taigans are adapted for working at altitudes of up to 3 thousand metres above the sea level, in areas with complex topography. Since the ancient times, taigans have been used to hunt foxes, corsacs, marmots, badgers, wild cats, roe deers, wolves, mountain goats and argali. Sometimes while haunting, the skillful Kyrgyz berkutchi would as well use taigans together with their hunting golden eagle. Taigans are efficient at catching prey and are highly appreciated by hunters the world over. The reasons are simple: taigan is very manoeuvrable, persistent during pursuit and have great endurance for running.

Unfortunately, during the past century, the number of purebred taigans in Kyrgyzstan has been reducing. This phenomenon exists despite the raised awareness for their preservations and the necessary measures, taken at the government level. This breed requires constant attention, reliable guarding, protection and development. KEP hopes that by issuing these stamps, dedicated to taigans, the company will contribute to the preservation of this wonderful part of our national heritage.