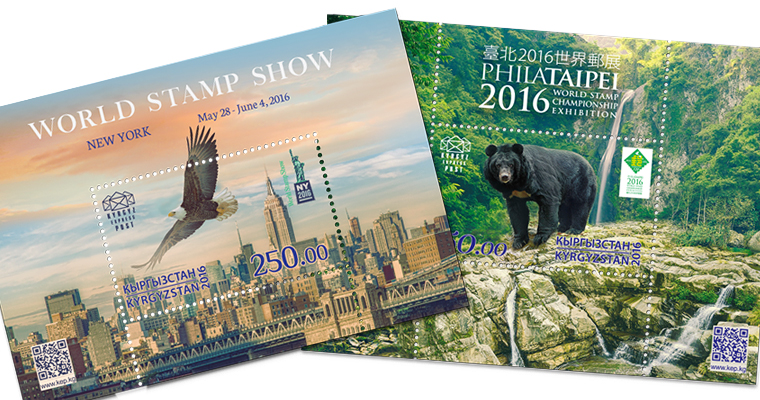 This year there are two biggest philatelic exhibitions that attract attention of the philatelic society, one of them is held in New York (USA) and another one - in Taipei (Taiwan). The Ministry of Transport and Communications of the Kyrgyz Republic puts into circulation two KEP souvenir sheets, dedicated to these remarkable philatelic events.

One of the souvenir sheets is dedicated to the World Stamp Show, held in New York from May 28th till June 4th, 2016. Such major events are held in the USA every ten years. The Show is organised with the immediate assistance of the American Philatelic Society (APS) and The Collectors Club of New York, and under the patronage of Fédération internationale de philatélie (FIP). Approximately 3,800 exhibitor stands, from more than 70 countries are participating in this grandiose event. Besides the postage stamp collectors, who are competing to obtain numerous medals and prizes, the exhibition in New York is also an important forum for many philatelic dealers, journalists, catalogue editors and postal service representatives. By the way, it is worth mentioning that KEP stamps are also presented as a part of Kyrgyzstan exhibit, which participates in the 13th international competition class for issuing postal authorities of UPU member countries and their territories. We hope that our stamps will be truly appreciated not just by the jury member, but also by all the visitors of the exhibition.

The KEP souvenir sheet, dedicated to the New York World Stamp Show, depicts a bald eagle, soaring above the most famous american megacity. The bald eagle is a wonderful bird, which, since 1782, is also the national bird of the United States of America and appears on the Great Seal of the United States, the presidential flag, some of the money bills and other state attributes.

The other KEP souvenir sheet is dedicated to another huge philatelic event of the year, which will be held in Asia, on the island of Taiwan, on October 21-26, 2016. This event is the World Stamp Championship Exhibition PHILATAIPEI 2016, also held under the patronage of the FIP and organized by Chunghwa Post Co., the Chinese Taipei Philatelic Federation and the Taiwan External Trade Development Council. There are representatives of international philatelic organizations from 90 countries participating in this event. Among other reasons, PHILATAIPEI 2016 is remarkable because, during the exhibition, the FIP will also hold its 74th congress.

On the souvenir sheet, KEP has decided to depict a typical animal of the Taiwan region - the Formosan Black Bear (Ursus thibetanus formosanus). The bear stands against a background of wonderful forest scenery, which explains why this island was once known in Europe as “Formosa”, or “Beautiful”.

We hope that the visitors of PHILATAIPEI will appreciate our souvenir sheets and they will be glad to have them in their stamp albums.

We wish all participants of the world philatelic exhibitions lots of luck and well-deserved awards. As for the numerous visitors – we hope they enjoy their time at the events, together with their fellow-collectors, and we hope they will find many interesting things to enter their collection.